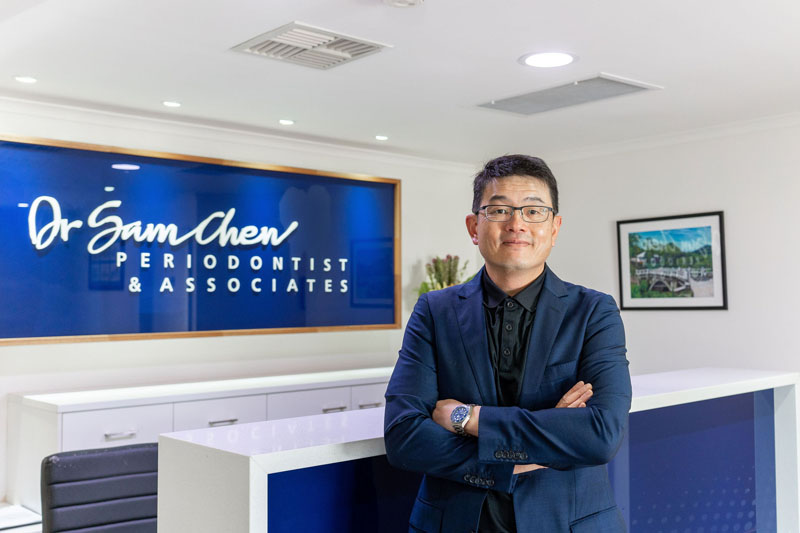 Graduated from Bachelor of Dental Surgery at University of Adelaide in 1995. After extensive experience in general dentistry, he followed his passion and commenced specialist training in 2003.

In 2005, Sam completed the degree of Doctor in Clinical Dentistry (Periodontology) from the University of Adelaide. His postgraduate research involved areas of stem cell tissue engineering and periodontal tissue regeneration. An award for research was given for his thesis on “Putative Stem Cell in Periodontal Ligament” by the Australian Periodontal Research Foundation. This was later published in the Journal of Periodontal Research.

In 2006, he gained his fellowship in the specialist periodontic stream with the Royal Australasian College of Dental Surgeons. Apart from working in his busy private practice, Sam was also appointed as an Associate Lecturer in Periodontics at the University of Adelaide and clinical demonstrator for para-dental study in TAFE SA between 2006 to 2008. He was elected as the Federal President for the Australian Society of Periodontology in 2008 and completed his service in 2010. During his term, he continued to promote periodontal education among dental professional. The biennial scientific conference involving well respected international and interstate speakers has been a highlight of his presidency.

Sam has been appointed as a consultant for periodontic postgraduate education at the University of Adelaide. His professional sub-specialties include dental implants, guided tissue regeneration, mucogingival surgery and complex periodontal management.

Sam is also fluent in Mandarin.